What is the Cave of Santo Hermano Pedro officially? 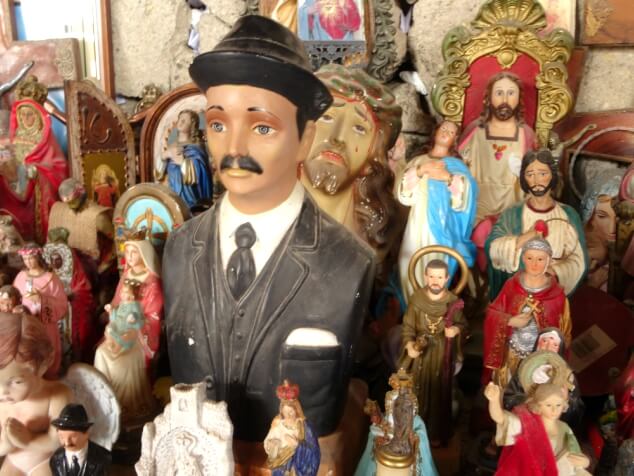 A religious site located just a stone’s throw away from Tenerife South airport, the Cave of Santo Hermano Pedro (Saint Brother Peter) is where the saint would stop to rest as a child while moving his goats from their grazing spot to their home high up in Vilaflor. The young saint also used the cave for praying and even as a place to hide during pirate attacks, if you believe Wikipedia. Instead of praying or hiding children, today the inside of the cave is filled with gifts and notes left by the saint’s devotees.

What is the Cave of Santo Hermano Pedro really? 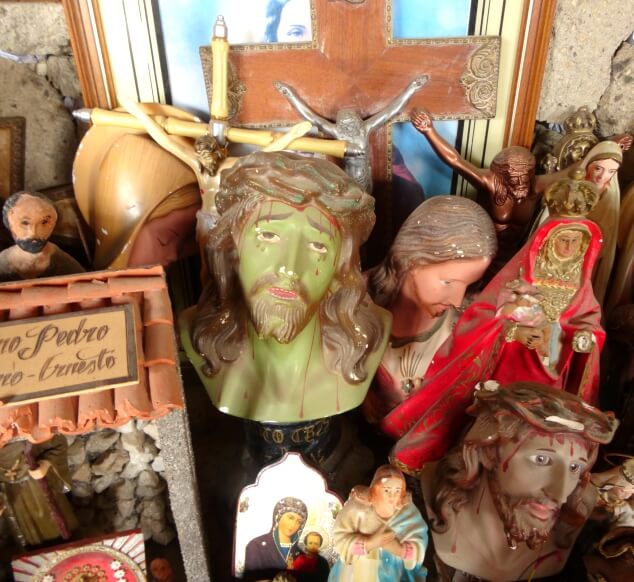 When you get there, you’ll find the setting rather odd. The Cave of Santo Hermano Pedro is set in a shallow gorge bang in the middle of Tenerife South Airport’s flight path. So close, in fact, that a runway marker is actually stuck on top of the cave.

The whole outside area seems very large and you’ll wonder just how big this cave actually is. It’s tiny. The entrance to the exit is about 15 steps. And yet it’s surprisingly popular, so you should wait until it empties out a bit before you go in.

Once you’re in, you’ll see stuff everywhere. In amongst the usual religious items, such as statues of saints, rosary beads, religious artwork and prayer letters tucked into gaps in the walls are a few bits and bobs that just seem out of place. Like statues of pop culture icons and generic pictures of pets. Even the more spiritual believer will have a hard time making sense of some of the things in there.

The gift shop on the other side of the gorge is in a another cave that’s larger than Peter’s and has remarkably little in it. They seem to have got it all back to front. 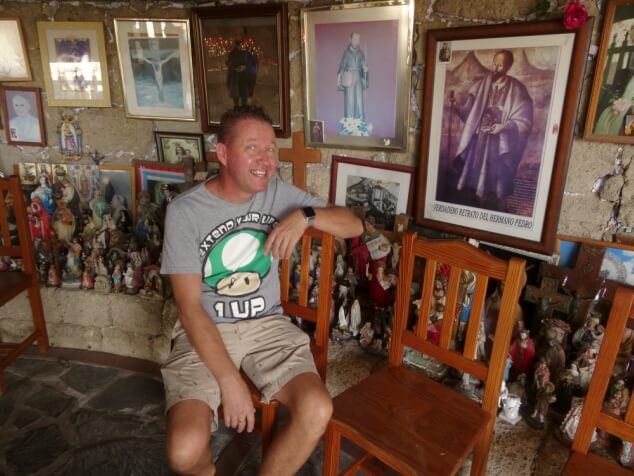 When looking for things to do in Tenerife, we agreed to just steer clear of any religious buildings as, well lets face it, they’re a bit dull.  I bullied Nicky into checking this place out as I was looking for somewhere to take my mum on her next visit, who’s also a bit dull.

Unexpectedly, this place was definitely an exception and rightfully deserves to be on AtoZTenerife.com.

Do you remember the Blue Peter Bring ‘n’ Buy Sales? A great charitable concept where you donated any old crap and in return bought someone else’s old crap that you really didn’t want. Well I’m sure this is how this place got started. Problem is everybody is bringing and no sod’s buying.

Don’t be tempted to rush through because it’s mad and awesome all at the same time. But you need to look hard. Sure they’re plenty of crucifixes, rosary beads and photos of the Virgin Mary. But on closer inspection some of the statues seem somewhat inappropriate.

For example, a green Jesus that looks like he was auditioning for the Walking Dead. Pele was also there next to a Chinese lucky cat. What’s that about? Though the offering I found the most chuckle-some was an empty box of Ferrero Rocher. Clearly nobody is spoiling Brother Pedro. I shouldn’t say this about a religious site but it was a right laugh. 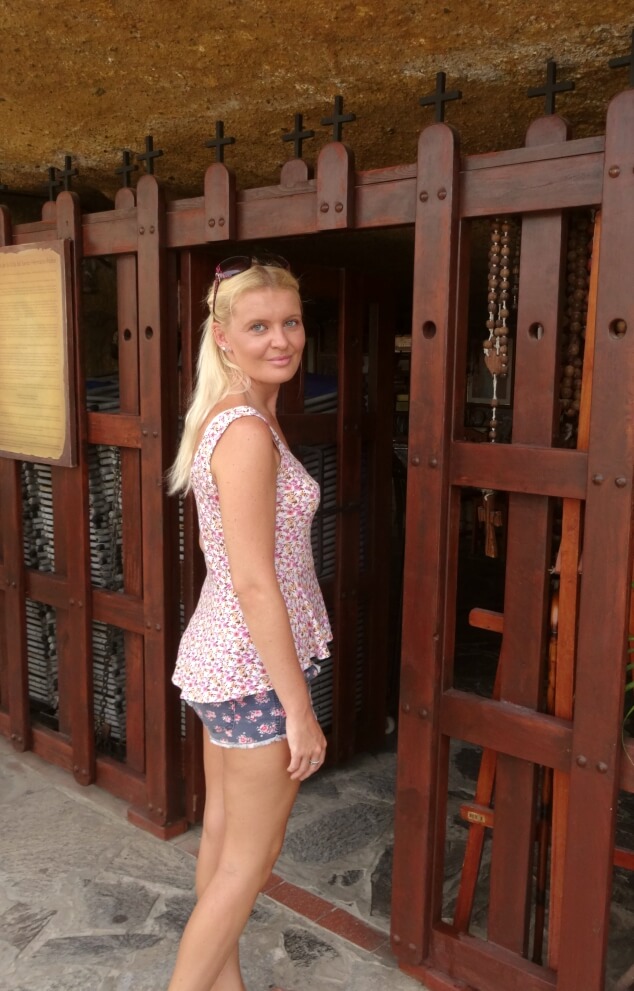 I absolutely loved it! We visited the Cave of Santo Hermano Pedro on the off-chance one morning because I was in a foul mood and Ian thought it might cheer me up. I wasn’t expecting much (religious cave-shrines aren’t exactly at the top of my fun list) but as soon as I stepped inside, I knew this place was going to put a smile on my miserable face.

The first thing that caught my eye was a box of green ‘L’ plates left haphazardly on the floor. I still think about that box to this day. I’m sure it’s some sort of spiritual-religious metaphor. Or maybe that’s just the English lit student in me reading too much into it.

From there my eyes wandered over to a metal shelving structure that looked like something you’d see in a Chinese shop. It was beyond brimming with trinkets. Some religious-looking ones representing saints. And other slightly less religious-looking ones of kittens playing with balls of string, Converse trainers covered in graffiti, Border Collies with ‘Bienvenido’ signs, colourful clowns sitting on thrones…and that was just one tiny section of the cave.

I’m sure most people spend about 10 minutes here, but I could have looked around for hours. It’s one of those places that no matter how many times you go, you’ll always see something new. Partly because there must be millions of little bits and bobs and partly because so many people visit every day. When we were there, there were 3 bus trips visiting – one of which had come all the way from La Palma solely to visit the cave!

Even though you might have to travel 30 minutes to the cave only to spend 10 minutes inside it, I 100% recommend you visit the Cave of Santo Hermano Pedro and add it onto your list of things to do in Tenerife! I mean, it’s not every day you get to visit a religious shrine that’s got more statues of Laurel and Hardy than the saint it represents, is it?

Insider tips for the Cave of Santo Hermano Pedro 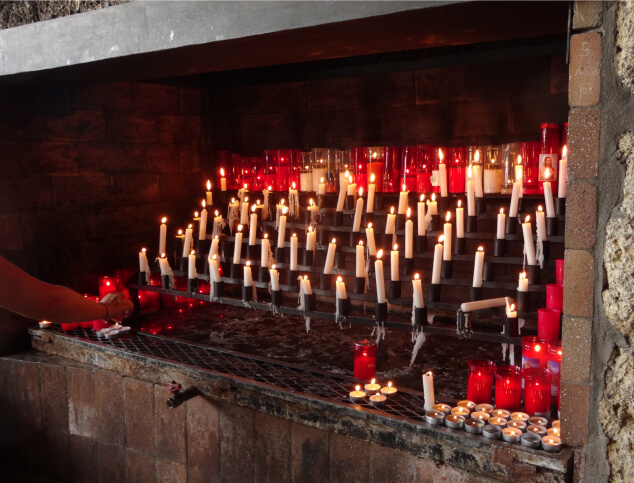 If you’re not familiar with the area, the Cave of Santo Hermano Pedro will probably be pretty hard for you to find. The road leading to it is roughly opposite Montaña Roja and heads north toward the motorway. Just keep driving along that road until you see a break in the dusty scenery and a group of people milling around. There’s a short, steep hill that reveals a free car park at the top on your right (if you’re driving up from the coast).

Important info about the Cave of Santo Hermano Pedro 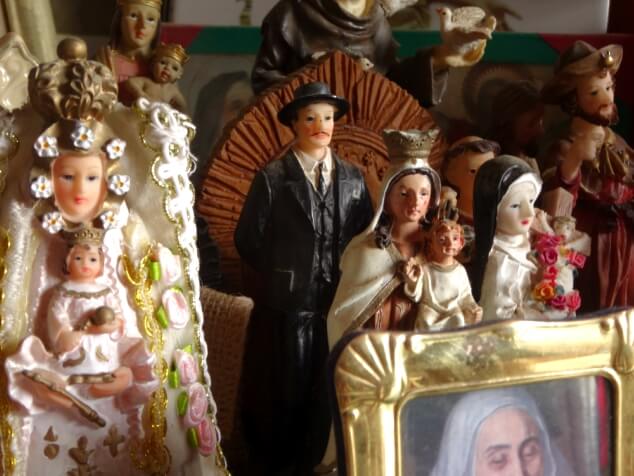