What is the Santa Cruz carnival officially? 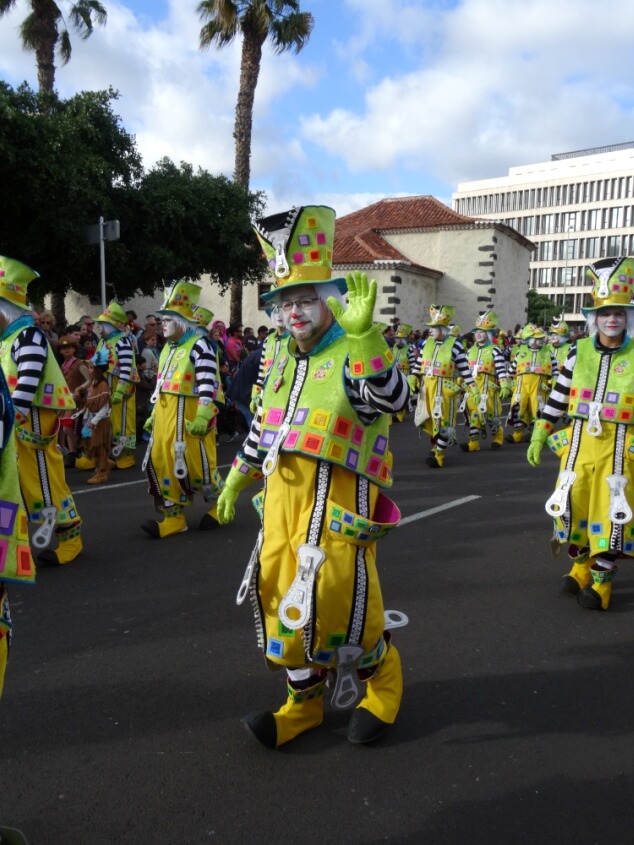 Widely reported as being the second best carnival in the world after the one in Rio de Janeiro, the Santa Cruz carnival was officially declared a ‘Tourist Festival of International Interest’ in the 1980s. Don’t let the dull name fool you. This event is huge and attracts 100,000s of people each year. Events take place throughout the capital, beginning with the Carnival Queen election at the Recinto Ferial de Tenerife, before moving onto the official opening parade which moves throughout the city.

The following week is filled with dance school competitions, musical performances, carnival acts, formal balls, street parties and classic car shows. The event reaches its climax on ‘Carnival Tuesday’, with the main parade when 100s of people dress up as everything from Sponge Bob Square Pants to human butterflies with 10 foot wings march through the streets.

What is the Santa Cruz carnival really? 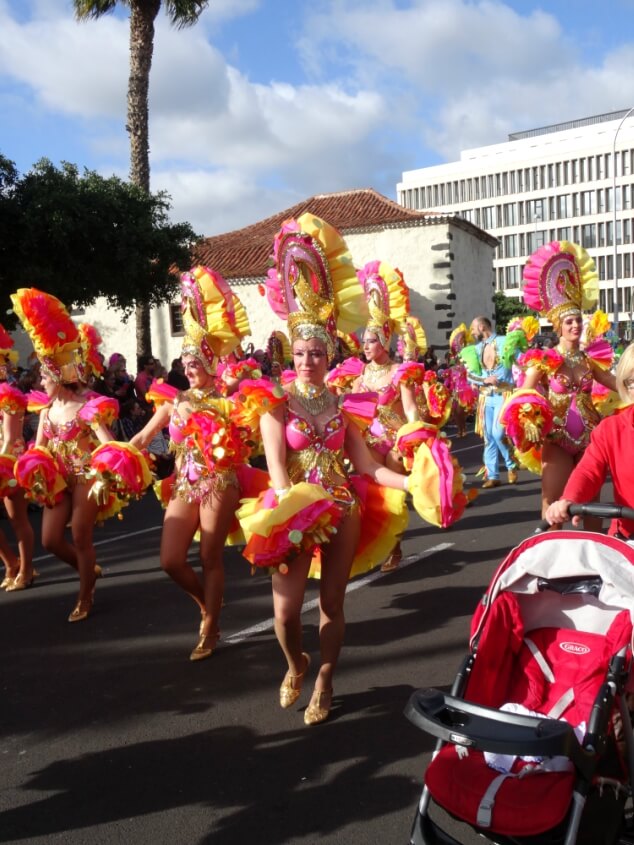 We can only tell you about what the Santa Cruz carnival parade and the surrounding attractions are like, since that’s the only bit we’ve been part of.

The parade is an outdoor show that lasts a couple of hours, making its way from the Avenida de Francisco La Roche road in Santa Cruz to the Plaza de España. There’s a new theme each year which some of the participants follow. But for the most part, there’s a little bit of everything. From OAPs wearing traditional Canarian outfits twirling through the streets to the captivating Carnival Queen wearing a dress as big and as heavy as an elephant.

Closer to the seafront is a funfair-like street filled with rides, attractions and food stalls you might want to accidentally-on-purpose forget about if you’ve got kids and are on a tight budget. Here you can do everything from explore a Mr Bean-themed haunted house and attempt to defeat all odds by tossing a ring around something shiny or grab a hot dog laden with cheesy crispy onion goodness and sink a couple of freshly-prepared sugarcane mojitos to make waiting for the Santa Cruz carnival parade to begin a little more bearable. 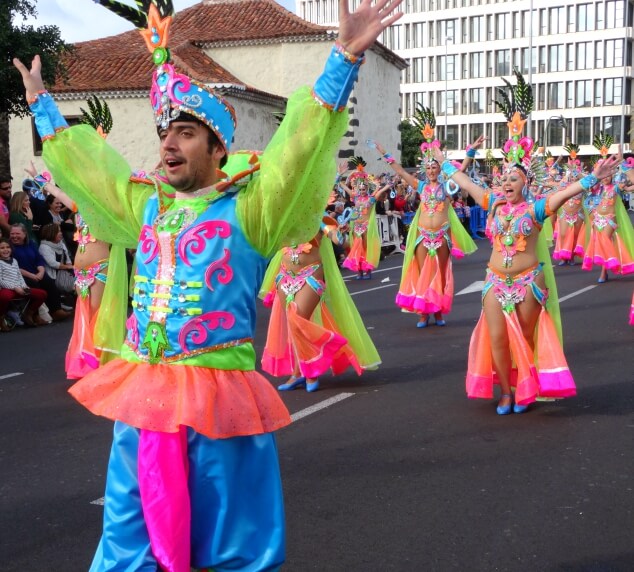 If you want to see a really good parade, go to any major theme park as they’re leagues above anything you’ll see here and any comparisons made to Rio I find laughable. The main reason for this huge divide can be summed up in one word: discipline.

Sure it’s popular. But this potentially could be a massive European event. The sad thing is that the hard work has already been done. The costumes and floats are to a very high standard. The bands are talented. And 50% of the dancers make the grade. And yet it’s presented in such an unprofessional manner.

This is a slow moving parade. There should never be multiple 10-minute gaps of nothing.

The bloke driving the amazing looking float should not be chatting on his mobile with a fag on. It looks dreadful.

Kids are great. But if they’re too young to walk the route they shouldn’t be there. Because mum (out of costume) pushing the pram with a fag on ruins the overall look. And all my photos.

And don’t even get me started on the 4 lads in dresses and stockings with balloon breasts running around holding a beer in one hand and a fag in the other with a bit of cardboard stuck to the front of a stolen Hiper Dino shopping trolley saying Lee n Lance auto repairs. Is this parade not better than that?

There needs to be incentives for groups to conduct themselves in a more professional manner. I get that the participants are all volunteers. But I’m pretty sure that the 1,000+ performers in Brazil are not on full-time indefinados.

The low-light for me was when two of the performers actually gave me their phones and asked me to take a photo of them.

If you’re in the capital or the north of Tenerife then pop along. It’s a nice afternoon out. If you’re in the south and are only interested in the parade then stay where you are and wait for the one Los Cristianos (it’s just as bad).

Overall rating: 3/5 (slightly generous, but a lot of effort must go into those costumes) 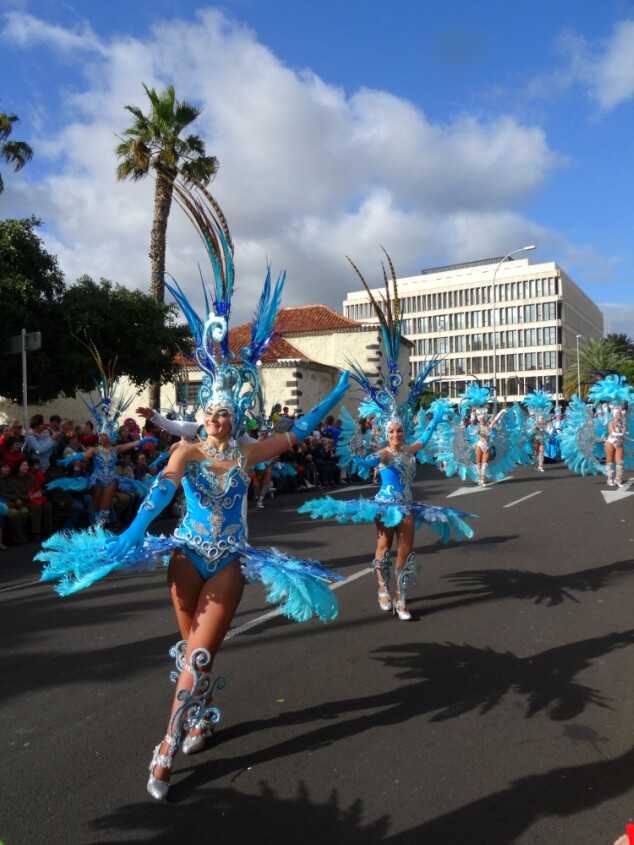 Watching the Santa Cruz carnival parade is touted as being one of the best things to do in Tenerife and I was genuinely excited to watch it and was expecting something truly amazing. That was probably my downfall right there.

The parade began at around 4pm, but we had to pick a spectating spot and bravely defend it from late-comers trying to push in literally hours beforehand. And after you’ve been on your feet for hours, being relentlessly jostled by people who don’t respect queues quite in the same way as Brits, something bloody spectacular better be coming.

But instead of a parade extravaganza that would put all others to shame, we were presented with something that looked like Ian and his friends had thrown together. The costumes were jaw-droppingly incredible, with the hours of dedication spent making them clearly evident. But it felt like the effort had been allowed to slip in other places. The dance troupes were a bit of a hit-and-miss, with some dancers taking it more seriously than their friends who texted on their phones throughout the choreography.

Then you had some adults riding on amazing floats that must have taken forever to make, somewhat diminishing it all by leaning over the side with a bottle of Dorada in one hand and a cigarette in the other. Add to that the women who were walking behind school groups pushing prams and having a right good natter and the phrase “you’ll never believe your eyes” is totally applicable, but not for any positive reasons.

Despite how the above comes across, I’m not saying you shouldn’t go and see the Santa Cruz carnival parade. If you’ve never seen a big parade before and you’re willing to take the classic Canarian laid-back vibe as part of the event’s charm, I’m sure you’ll have a fantastic time. Just find your perfect spot early and bring a fold-up chair if you don’t want to set a new world record for standing up. 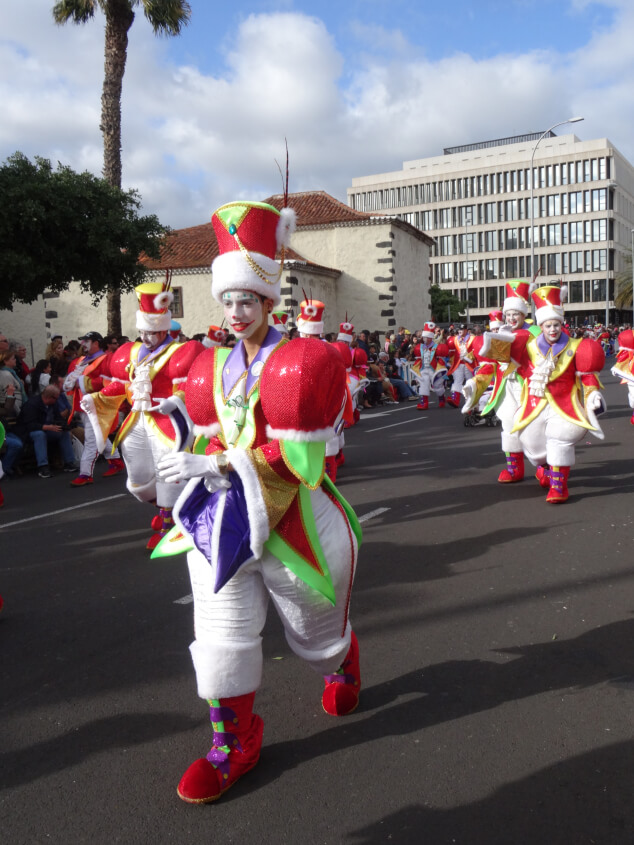 Although the Santa Cruz carnival parade begins at 4pm, you need to get there hours in advance to get a good watching spot. We arrived at around 1pm and we definitely weren’t the first ones there! If you’re not the most patient person in the world, take a powerbank and load your phone up with TV shows and films to keep you entertained while you wait. Nothing in Tenerife ever begins early, so you really will be waiting hours for anything to happen.

Book a seat or bring a chair

A very limited number of chairs are set up along the carnival route that you can book in advance online. They’re pretty cheap to reserve (just a couple of €) but get snapped up really quickly. If you can’t reserve a chair, do the second best thing and bring one with you. If you don’t already have a foldable chair, you can snap one up from pretty much any Chinese shop on the island and after 3+ hours of waiting, you’ll be really glad you did.

You’ve got to have a strong backbone and thick skin to keep your place for hours, which is something I (Nicky) really struggle with. If you do arrive early and get a good spot, you’ll have people of all ages trying to push you out the way when the parade begins. Just remember to be strong and keep a hold of your spot. You did the hard work to get there – you deserve to see the parade! 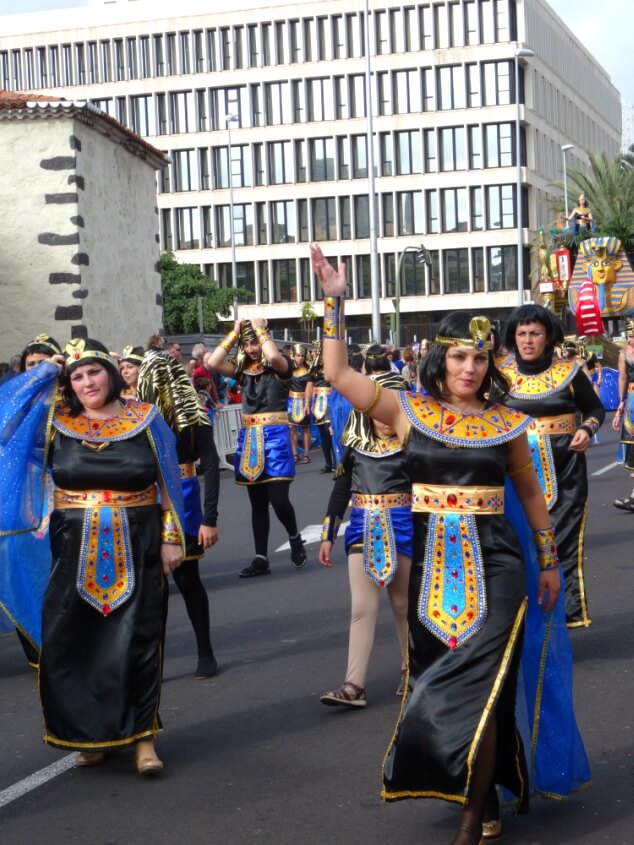 Date: February. The dates change each year. Check carnavaldetenerife.com for this year’s dates

Time: The parade begins around 4pm

Other events in Tenerife you’ll love